The Great Ocean Road is full of surprises and if you are lucky wildlife sightings might just be one. The area of Kennet River is an excellent place for seeing Koalas and near impossible not to see at least one sleeping in the tops of the trees. A part from that then you just need to keep you eyes open and the noise down.

© Our Shadows Will Remain

The Twelve Apostles is another example of how the coastline is continuously being shaped along the Great Ocean Road. Once part of the coastline they were gradually eroded into rock arches, now only stacks remain. The stacks of limestone rock have been known as The Twelve Apostles for many years even though there has ever only been nine, since the collapse of one stack in 2005 (the remains can be seen in the picture above) there is now only eight. Due to the extreme weather conditions and the soft limestone rock the rate of erosion at the base of the stacks is roughly 2cm per year.

Read the next post in this series London Bridge.

London Bridge is now known as London Arch. It was named after its resemblance with The famous bridge in London but in 1990 one arch collapsed into the sea and left the other disconnected from the coast. Two tourists were stranded on the further end of the bridge when it collapsed and had to be rescued by helicopter. 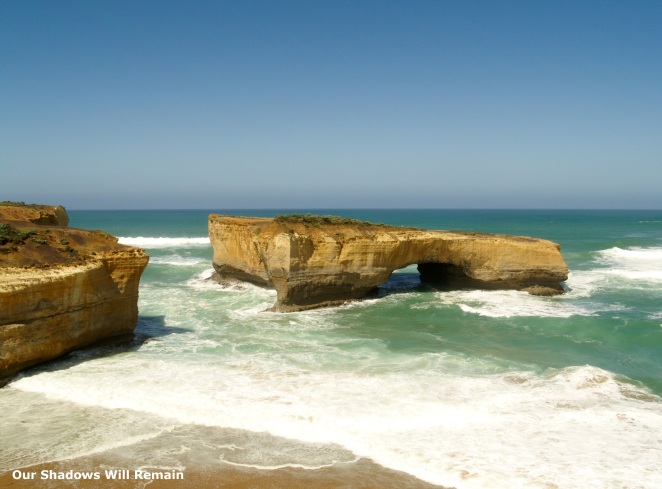 After my journey along the Great Ocean Road I continued to Adelaide and then to Perth by Crossing the Nullarbor.