Over the years that I have lived in Helsinki I have become to rely on the metro to move around the city, as many others do too. It has also been a place for me to explore my photography. Though Helsinki metro doesn’t have the wow factor that other systems may have (I am thinking of you Stockholm), or the extensive reach of others, it still has its charm.

Helsinki Metro has been a continuous project, opening for operation in 1982 after almost 30 years being planned. The small rail system has gone through many changes with new stations being added up until 2007 and with huge expansions currently under development, Lansimetro.

Helsinki Metro carries 63 million passengers a year, a relative small number when you consider the London Underground carries 1.34 billion a year and that is only the 11th most busiest metro system in the world!

Helsinki Metro is the Northern most metro system in the world.

Currently 11 stations, 6 of which are underground.

Plans to extend the metro to the west are under way.

Several of the Helsinki Metro Stations contain a number of art works and installations.

Currently Ruoholahti is the last station, or first depending on your point of view, on the current metro line. From here the plans are to extend the metro to the west, connecting Helsinki with the neighbouring city of Espoo. 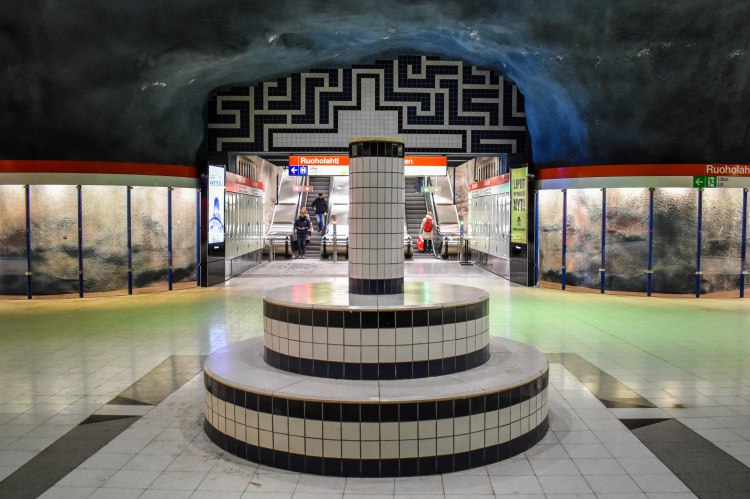 Ruoholahti contains an installation by artist Juhana Blomstedt, one of the many stations in Helsinki that does have some form of artwork. The station is decorated in blue and white tiles, reflecting Ruoholahti’s maritime location. 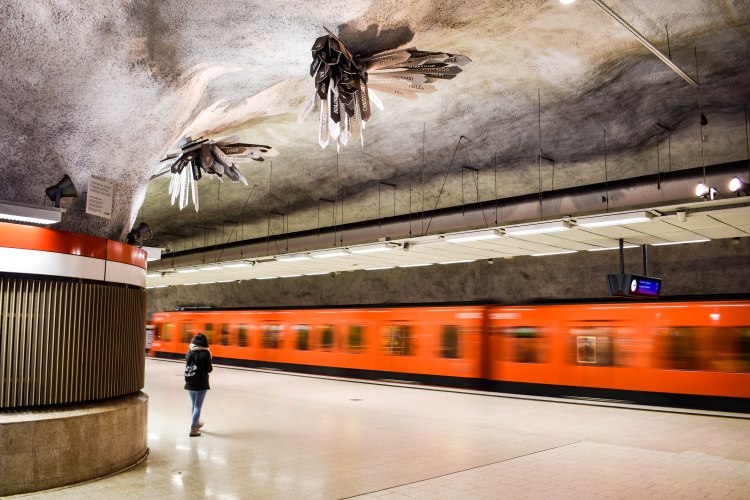 Kamppi is the station I use the most. Placed in the rock above the platform are signs pointing in ever direction, each sign has a city from around the world engraved on it.

In between the two platforms is a small space organised by HAM that hosts different art exhibits, changing a number of times a year. At the time of writing the space contains artwork by the street artist Jussi TwoSeven, before that it was the Japanese artist Yayoi Kusama.

See ROAR27 by Jussi TwoSeven in my latest post Art in the Metro. 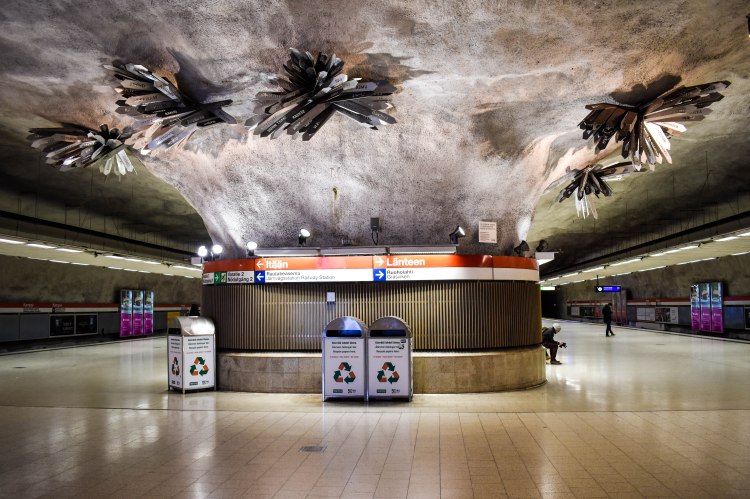 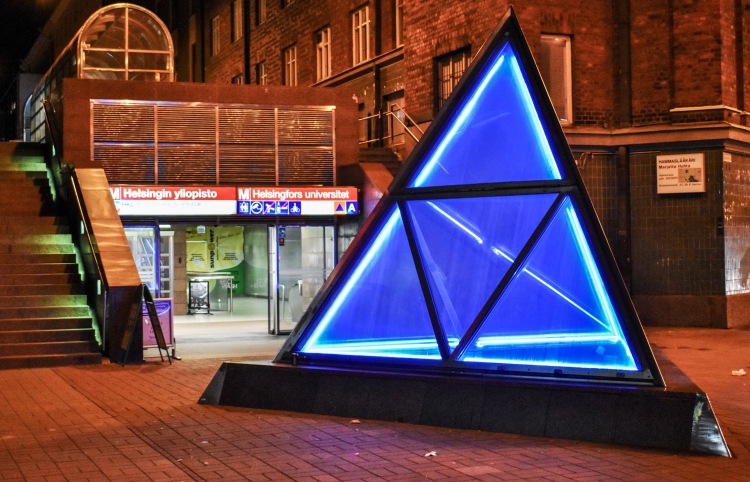 Formerly known as Kaisaniemi, for the park which is located a few hundred meters from the stations entrance, but the name was changed in 2014 to University of Helsinki for the campus that it serves.

University of Helsinki station is one of the most colourful out of all of the stations and that is because of the art installation that starts at the top of the escalators and continues down onto the platfrom. The lighting installation was created by Annikki Luukela and is named Network. 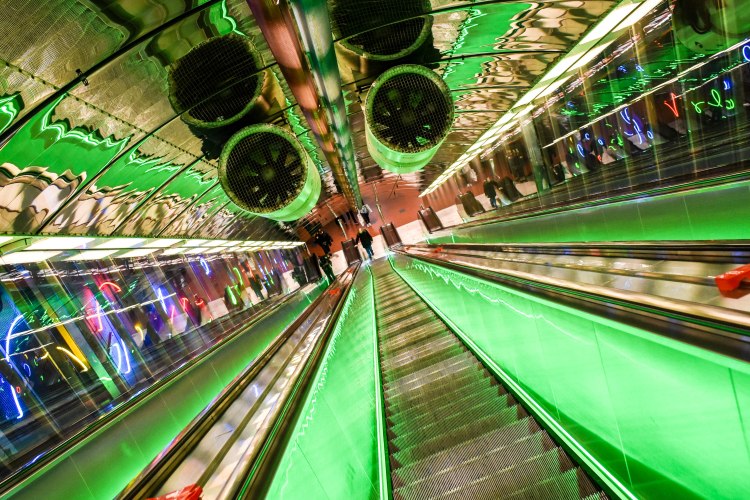 The first station above ground when heading east from the from city and the last to be completed in 2007. Currently, the area surrounding the station is under heavy development but still one of the most interesting with Suvilahti and Teurastamo on its doorstep.

The station was built around the existing track with little disruption to metro traffic, which is also the reason why there are two platforms, one for each direction of travel, rather than a central platform that serves both directions.

The platform was at one time full of vibrant street art completed by locals and reflected the community that the station serves but upon a recent visit I found to my surprise that it was all gone!

But here is a reminder of its inspiration.

There is only one mistake, a part from heading in the wrong direction, that can be made when using the Helsinki Metro and that can happen here at Itäkeskus where the metro splits, one to Mellumäki, the other to Vuorasaari.

Mellumäki is 17km from Ruoholahti station, the full length of the current metro line, and the northern most metro station in the world. After Helsinki the next contender would be St Petersburg and its most northern station Parnas.

Länsimetro or west metro will continue underground from the already existing Ruoholahti station and stretch for a further 13.5 km to the west of Helsinki. The extension was planned to open in August 2016 but has been delayed for an undetermined amount of time. In recent news it has been thought to open later this year but most likely not until March of next year.

Plans to extent the metro line have been underway since 1997 (though plans made in the 1950s contained stations in Espoo) when the city of Helsinki proposed the idea to the city of Espoo. The plans were continuously rejected until terms were agreed.

The new line will at first include eight more stations with a further five once phase one is complete. These new metro stations will connect the residents of Espoo to Helsinki, along with the current bus and train lines.

Have you enjoyed this? Then I would like to hear from you. What is your favourite metro system in the world? Have you any great pictures from beautifully decorated metro stations? I would like to see them. Also, I am a huge fan of long exposures and moving trains, let me see them in the comments below.

More information on the art works that feature in many of the stations can be found on HAM Helsinki’s Sculpture Database.

If you like photographs of metro stations, so does Somewhere in Helsinki. His Instagram also includes the beautiful metro stations of Stockholm.