Welbeck Street Car Park is a short walk from Oxford Street in London. It was designed and built in the Brutalist style in the 1970s as parking for the nearby Debenhams. Its facade made from prefabricated concrete polygons has become very recognisable.

In 2017 a petition was started in order to put pressure on Historic England to grant the building with listed status or at least consider a design of the new hotel that incorporated the iconic facade. Unfortunately, both were unsuccessful. 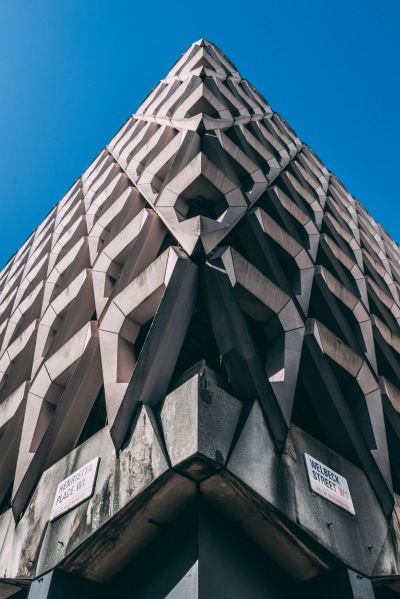 The demolition was scheduled and plans went ahead to turn the site into a 10 storey, 206 bedroom hotel.

I visited the car park in early 2019, at the time demolition hadn’t begun on the facade but work was definitely in progress. There were workman on every corner taking their breaks and the lower level entrances had been boarded up. Since then, scaffolding has been erected around the outside.

I made it just in time to take my photos, maybe a little too late. I would have like to see the building from the inside and had the freedom to move around the building more freely with uninterrupted views. Hopefully I will be able to return in the future and photograph the change, whether or not it is for better or worse.