I don’t spend nearly enough time in London, it’s a great city with so much to offer. When I do make it there I often get wrapped up in the usual sights to see anything new from the city, but I normally come across one or two new details which impress me.

More often than not these details are the ones that you come across by mistake, you find them when you least expect to, they surprise you, and this is exactly what happened during my recent visit.

But before I tell that story I have to go back a few years to the beginning.

Around five years ago I was flying out to Helsinki from London and had heard about a Damien Hirst exhibition taking place at the Tate Modern, I decided to head down a day early, stay with a friend, and catch my flight after checking out the exhibition.

Damien Hirst at the Tate

Outside the Tate Modern I was greeted by a large sculpture of a human body. The sculpture closely resembled the plastic figures that are used in biology classes,  the ones you can take apart to understand the body’s anatomy, only much larger.

It was my first time at the Tate and my first time seeing Hirst’s work, both equally impressive. I had arrived early and the museum hadn’t yet opened for the day so I spent a bit of time photographing the sculpture and the view over the Millenium Bridge to St Paul’s.

The sculpture itself looked over one of my most favourite views of the city. 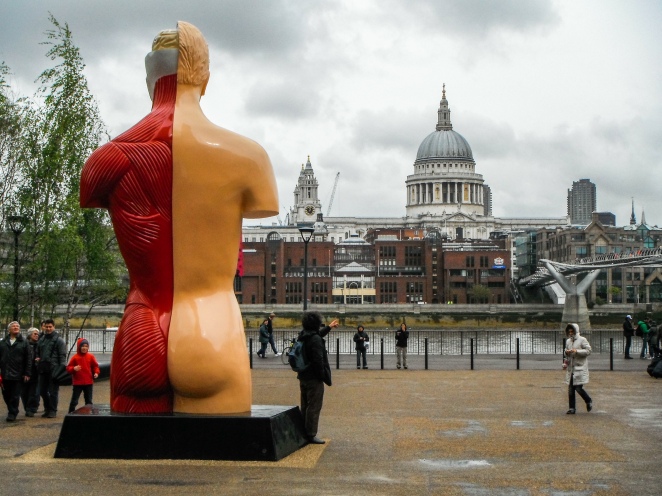 Sculpture in the City

This brings me to my more recent visit.

On the way to Leadenhall Market, one of London’s oldest market, to meet a friend I came across another sculpture. At first I thought the sculpture was the same as the one I had seen in London all those years go. It wasn’t until I came home and delved into my archives that I realised they were different.

My searched deepened, I found out the name of the piece, Temple also by Damien Hirst, and that it was part of a public art exhibition called Sculpture in the City.

I guess the point of this story is to say that two unconnected points in time can be linked in a way you may have never expected, chance encounters that take you back in time to past moments. If nothing else it was a good excuse to go through some old photos.

More from Sculpture in the City 2017 by TimeOut and about the artworks.

Also my last post about the Black Shed Expanded

Explore the Helsinki Metro and the sculptures you can see along the journey, as well as the Sculptures of Helsinki in general.