There are two things about this photo that I like, the shadow of Mannerhiem’s statue on the outside of the museum, the other is the glowing red light of Mona Hatoum’s exhibit Hot Spot on the top floor of the Museum. Just a shame about the construction in the foreground. 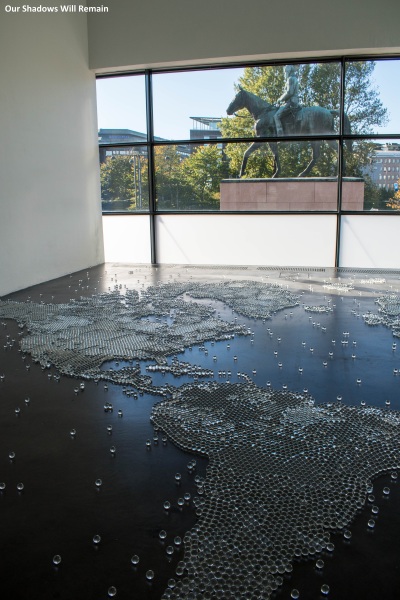 Mannerhiem, or by his full name Baron Carl Gustav Emil Mannerheim (1867-1951), is known to be one of the most influential figures of the 20th century in Finland. He started his military career in the Russian Army, during the years when Finland was an autonomous part of Russia. Finland declared its independence in 1917 but shortly after a civil war broke out between the reds and the whites, Mannerhiem was appointed military chief of the whites.

During World War II Mannerhiem was appointed the commander in chief of the Finnish armed forces and led them to victory against the Soviet Union. Once World War II was concluded Mannerhiem was elected president and served for two years. He died shortly after in 1951.

His statue of him riding a horse on Mannerhiemtie was unveiled in 1960 after public donations were raised. Including the pedestal the statue is 11.7 meters tall and can be seen easily from the first floor of the Kiasma museum it stands out the front of. This isn’t the only memorial to Mannerhiem in the city, there is also the house where he lived which has been preserved and turned into a museum, as well as his grave in Hietaniemi Cemetery.

Looking for a new angle to photograph the statue I went inside Kiasma Museum. Photographing the statue from inside would allow me to include the work of Mona Hatoum’s which is currently in the museum. Her work often features maps and globes, below is a great example of a world map made from hundreds of marbles slightly modified to fit the space. Another of my favorites is a globe with the continents outline in red lights called Hot Spot.

Jean Sibelius was born in 1865 and was a composer of classical music, his music is often credited with giving Finland a national identity as they struggled for independence from Russia. Sibelius’s image was on the 100 mark note before Finland adopted the euro and his national day is celebrated on his birthday, December 8th.

The Sibelius Monument was inaugurated in 1967 and since then has become one of the most popular tourist destinations in Helsinki. The monument is 8.5 meters high and 10.5 meters wide with 600 metal pipes making up its vast size. The monument also contains a likeness of Sibelius seen on the right.

During the summer the monument is crowded with tourists posing next to the metal pipes and even putting their heads inside. Another popular photograph is to take one pointed up to the sky through the pipes. On this autumn day the area was empty except for a lone woman sitting on a bench just out of frame to the left.

This week saw Finland celebrate Finnish literature and the birth of national writer Alexsis Kivi on 10th October, flags were flown on every street.

Kivi was born in 1934 and became a writer when he moved to Helsinki for university, his most notable work was Seven Brothers. Even though Kivi saw success he died at the age of 38 in poverty and with a drinking problem.

His statue is the center piece at the Railway Square in Helsinki, he sits in front of the National Theater in a contemplative pose. The statue was unveiled on Kivi’s birthday in 1939.

Kullervo Addresses His Sword can be found in the grounds of the winter garden since 1967 after being moved from Hesperia park where it first stood. The statue was designed by Swedish born sculptor Carl Eneas Sjöstrand, who was considered the founder of Finnish sculpture as he played a large part in its promotion during the 1850s and 60s. Sjöstrand Made many works relating to the Kalevala, Finland’s national epic, and it’s characters.

Lifting Power was unveiled in 1962 to commemorate 50 years of the Cable Factory, the statue is 4 meters high including the stone pedestal. Enjoy Lifting Power during winter and summer, notice the addition of the tie around his neck. 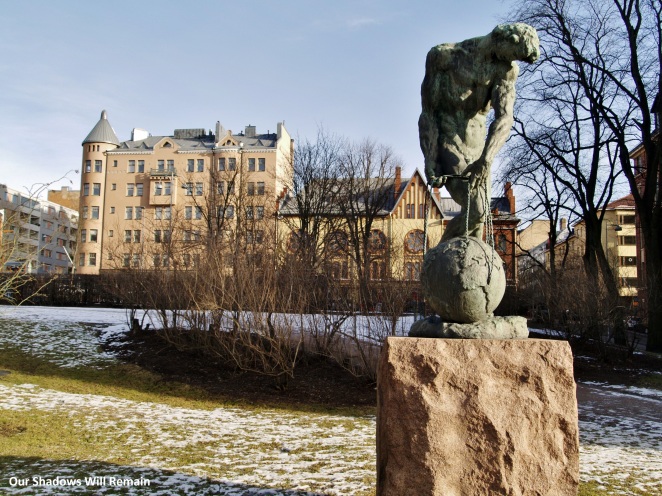